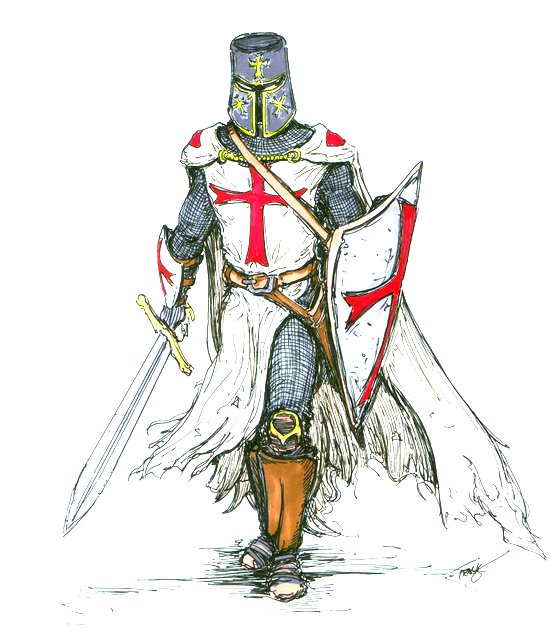 Addressed to high school age youth by Craig Manners
​December 2014
(Abridged version below. Full article available by clicking on the knight image to the right >>).

Billions of people around the world devote their time, energy and resources to the pursuit of freedom.

Of course freedom is a good thing. People have always fought for freedom, in wars, in politics. Many of our forefathers died fighting for our freedom, and we should be very grateful for the freedom we have in Australia.

But the freedom the modern secular world, especially the developed countries we know as “The West,” are increasingly desperately clambering for today is not the sort of freedom worth fighting for. In fact it is a type of non-freedom, it is a lie, a deception. It is really slavery dressed up as freedom. You see slavery is often deceptive. No one willingly enters into slavery do they? So, to enslave requires either force or deception. That is why the progressives indoctrination program "Safe Schools," which is completely un-safe, is called an "anti-bullying" program, to deceive people and get it into our schools. It is neither safe nor an anti-bullying program.

People have always had causes to fight for. Some are worthy and worth fighting for, like abolishing slavery or apartheid or abolishing the mass murder of millions of human babies every year throughout this same West. Others are dressed up as “human rights” or “civil rights” and promoted as just and worthy causes to fight for, but they are nothing of the sort. A current case in point is the way so many, in the West especially, have fallen for the lie that undermining the vital institutions of traditional marriage and the traditional family, foundational institutions of society for thousands of years, is somehow a just cause worth fighting for.

With the use of mass media, TV sitcoms, movies, popular music, rock stars and virtually pornographic YouTube music video clips some are trying to force themselves onto our society and destroy the foundations which have made us free and strong. Sadly, they seem to be succeeding and have put our true freedom in Australia and the West under immediate threat. Marriage and family is just the first step. They will not stop there, these movements never do.

Freedom and truth requires defending by every generation. Our current generation is unfortunately increasingly at risk of becoming over-run by this great deception. As our forefathers had to go to war to defend our freedom, so too will we, but thankfully, hopefully, in a different type of warfare, not so much with guns but with words and minds.

A big part of the problem for our generation is that the word “freedom” has become widely misunderstood and misused. The majority culture of our day understands freedom to mean the freedom to do whatever an individual wants, basically without restraint. Unfortunately our politicians seem to have been hoodwinked into believing this as well and we are reaping what has been sown.

Defeat in a battle can sometimes come down to such a small, seemingly simple or harmless thing such as an advancing army running out of water or petrol, or a small mosquito spreading malaria among the troops, or a word used in the wrong way.

In June 1978, speaking at Harvard University, Soviet freedom fighter and winner of a Nobel Prize in literature, Alexander Solzhenitsyn, not only argued against the worldview which had enslaved his own country through Communism, but he prophetically assessed a major flaw and deception in the prevailing worldview being embraced by the West. He said that a “destructive and irresponsible freedom had been granted boundless space.” This is even more so today.

The West has exchanged belief in unchanging truth, and a proper understanding of true freedom, for basically an anything goes version of freedom, which in reality is slavery calling itself freedom. It is a ruthless, deceptive, legalism, restraining true freedom and enslaving those who thought they were fighting for freedom.

The main area that the irresponsible adults, who are promoting these self-centered, damaging movements are inflicting major damage, is on children. No one seems to be thinking about our society’s children.

Freedom to kill, destroy and damage our society through the selfish demands of sophisticated bullies, and the resulting harm to children and our communities, is no freedom at all.

When a supposedly responsible politician expends time, energy and resources promoting something like amending a law to make it normal for a man to marry another man, and to do the sexual acts they do to each other, they are not being considerate of the damage they are causing our children.

Children discuss it in playgrounds and are influenced by our leaders to try it or to let homosexual pedophiles do it to them. It is difficult enough for children and especially teenagers to grow up, but to have to deal with this sort of thing is close to child abuse inflicted by supposedly responsible adults.

As with adults in our society who, with good conscience, oppose changing the definition of marriage to appease the homosexual movement, it is the same with children across Australia. Adults and children alike are being discriminated against, bullied and blacklisted for wanting to keep traditional marriage as it is, between a man and a women for life for the raising of children for the good of children and society.

I would like to encourage you to grow in your ability to see through the lies of these movements. Question them. Look at their fruit. Filter the wisdom of the world through God’s trustworthy and unchanging word, the Bible. Make a choice about who you would rather trust, God or man.

Be smart and discerning. See the truth through the fog of deception which saturates our society’s TV shows, newspapers, Hollywood movies, YouTube music videos, news programs, social media and politics.

Think through what they are promoting. Work out these false worldviews until you see the bad fruit they produce and compare them with the good fruit which is produced from a life of following God’s ways and trusting Jesus.

Not all things are good for you. Many will try to enslave you in different ways. Don’t fall for the lie that these people will tell you, such as, “You won’t know until you try it,” or “Try it you might like it”, or, "You are born that way." Drug dealers and the sexually immoral will say these things to try to get you addicted. These are just different ways of saying what was said to Eve in the garden when she was tempted to eat the forbidden fruit, remember, “Did God really say that”. The slave makers plant seeds of doubt and try to lead us astray. Don’t believe it, stick to God’s ways.

Those who will make you addicts and enslave you to things which destroy rather than bring life, satisfaction, happiness and fulfilment, will call you through the media, through friends, through a YouTube music video, at university, on a public bus, or through a contact on social media, to do things which will enslave you, things like trying cigarettes, drugs, alcohol, pornography, sexually immoral acts, and maybe later on to think that illicit sex, adultery, or divorce is an easy solution to some marriage difficulties, or that an abortion will be beneficial.

See them for the empty lies they are. Turn away from them and do not look back.

Freedom is not being able to do what we want, it is living according to the authority structures put in place by our Creator, for our good, and by us knowing and loving God as we do so.

It is ultimately foolish to say, “There is no God, and therefore I will live however I want, and no-one will tell me what to do, I will do it my way, ruled by no authority apart from my own desires!” This is not freedom. It will lead to chaos for such a person and all around them.

Imagine driving on a freeway at peak traffic hour if there were no recognized authority or if everyone was just rebelling against the road rules. Or a train going off the tracks, which act as its authority structure to restrain its direction for the good of those on board and those around the tracks! In the same way children are to obey the authorities placed over them, such as parents, teachers and the government (but only as far as they uphold God’s ways).

A very wise man named Paul, who lived two thousand years ago, said, "For you, dear friends, have been called to live in freedom-not freedom to satisfy your sinful nature, but freedom to serve one another in love." (Gal.5:13)

The battle is one of ideas, of worldviews, it is one of choosing to trust God or man, of defending God’s truth against the father of lies, the great deceiver we know as Satan. The battle is ultimately the same one started in the Garden of Eden, where Satan deceived Eve by planting a seed of doubt and enticing Eve to disobey God. Adam and Eve lost their freedom that day as a consequence, and all mankind has suffered ever since. The battle between freedom and slavery, between truth and deception has been raging ever since.

However the great news is that Jesus has overcome the world. He has secured the final victory, ensuring freedom cannot ultimately be taken from those who are on His side. Those still enslaved mock at this, while those set free rejoice. Seek Him and trust Him and you will be free indeed.

All of us have been affected or damaged in one way or another by wrong living, by following the wrong path, doing the wrong things, succumbing to the temptations which come to all of us, being deceived to elevate the bad as if it is good, the dangerous as if it were safe, and having to endure the fruit of such living, the costly consequences of our rebellion. Fear not! There is great news in the powerful truth that Jesus has paid the price for wrong living, He has taken it all upon Himself and offers true freedom to all who call on His name. Not just freedom, but removal of burdens, regrets, spiritual healing, forgiveness, fixed relationships and abundant true life both here and now and beyond into eternity.

​To learn more about Jesus and His gift of true life click here.

Create your own unique website with customizable templates.
Craig Manners