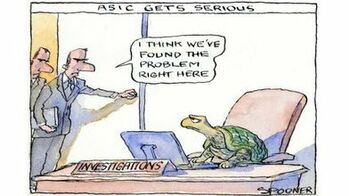 Craig William Manners v ASIC
The case between Craig William Manners and the Australian Securities and Investments Commission ASIC regarding the successful internet start-up venture capital company Adelong Capital Ltd should never have gone ahead. It was a waste of resources and an abuse of power by ASIC.

One of the most difficult, yet most defining periods of my life, one of the darkest and yet one that was used to let in much light, was during a five year corporate trial following my involvement with an ASX listed company called Adelong Consolidated Gold Mines N.L., first as a 32 year old stockbroker and corporate advisor and then as a director. It was my first foray into the corporate world and one which proved, with the boom and then bust, in early 2000, of the dot-com phenomenon, to be a fiery training ground which ultimately shattered my then career, reputation, confidence, trust, friendships, corporate ambitions and much of my previous world, but which paradoxically led to much more than I ever dreamed possible.

The public reporting on the resulting five year corporate trial was very poor, as I think it often is. In fact the reporting by The West Australian and The Age in particular was blatantly Christophobic, false and misleading, with no concern for the truth.[1] These journalists never once spoke to me nor sat in on any of the defense sessions in court. This is the main reason for me posting the following. But another reason is to share with you something of immeasurable value which happened to me through this difficult period.

If you throw enough mud and resources at a target you are bound to get some to stick, which did happen, but even with that mud it was found that there still was no dishonesty, no intent to gain, no deception, and no breaches of director's duties. with the 3 guilty verdicts.

The mud that stuck was a breach of a section of the Corporations Act (2001) which was only introduced after the offence with retrospective power, and which doesn't even exist today (I was the 1st and last, the only person to ever be charged under that piece of legislation). Uniquely, the finding was one which both the jury and judge found to lack all and any element of criminal wrongdoing. (See legal analysis HERE).

​The breach was found to be unintentional, unknowingly, potentially (especially with the benefit of hindsight) misleading (five years after the hype of the internet boom madness) but nonetheless reckless on my part. I agreed with that assessment in early 2000. I tried to offer a civil plea twice during the next 5 years, and to pay the losses of any victims the authorities could find. These offers were all completely rejected by the government prosecutor.

Solomon wisely once said, “The first to present his case seems right, until another comes forward and questions him.” (Proverbs 18:17). It is the same with press releases from someone’s accuser, backed with the full resources of the State, or articles by journalists who do not sit through the defense sessions of a court case nor speak to their target. When someone reads them they seem right, but that does not mean they are right, fair, unbiased or that they tell the true story.

As it has an ongoing affect on my ability to provide for my family I have repeatedly requested The Age remove their misleading slanderous articles from the internet but to no effect. I agree with Australian Prime Minister Tony Abbott who, again wisely, said, "I'm confident that it's not someone's past that matters; it's their future that matters." The Age media links remain live with their misleading content as if someone's past mistakes from 15 years ago must haunt them and keep them down for life.

Create your own unique website with customizable templates.
Craig Manners